Women in Finance: despite the impact of the corona virus, gender equality remains a priority in the financial sector

How gender diverse was the financial sector in 2020?

To answer this question, Women in Finance launched a survey among its members for the second year in a row. The survey revealed the following conclusions:

More institutions believe in the importance of gender equality

10 new institutions have signed the charter and joined Women in Finance. That brings the total to 47 members, or more than 90% (*) of the organisations active in the financial sector (* This figure is based on the number of employees working in a company.)

Each of the members commits to:

Members see on average two glass ceilings within their organisation

Today, the average Glass Ceiling Index (*) of Women in Finance members is 50, whereas in 2019 it was 43.02. While that is a strong positive evolution, it also means that our sector still has two times less women in senior management positions compared to the entire workforce.  Put another way, women today represent 52.4% of the entire workforce, while holding senior positions in only 28.9% of the cases.

(*) The GCI compares the percentage of women at senior management level with the percentage of women in the company as a whole. This gives an indication of the thickness of the glass ceiling (the smaller the figure, the thicker the glass ceiling is). The important thing is that women are equally represented at the top as in the organisation as a whole. 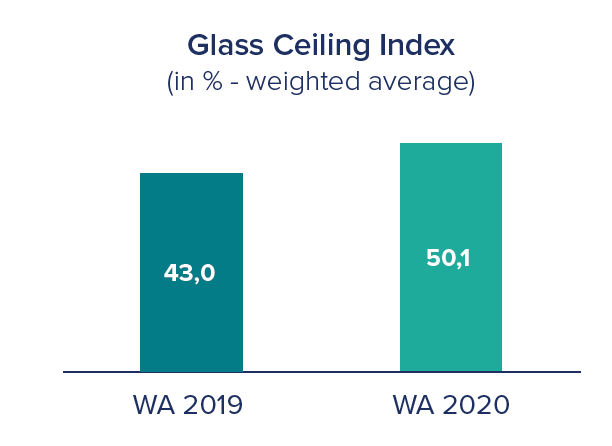 In one year, the number of women in senior management positions rose from 27.8% to 28.9%. This is a positive development, especially for younger employees in the sector: they will have more role models with whom they can identify. 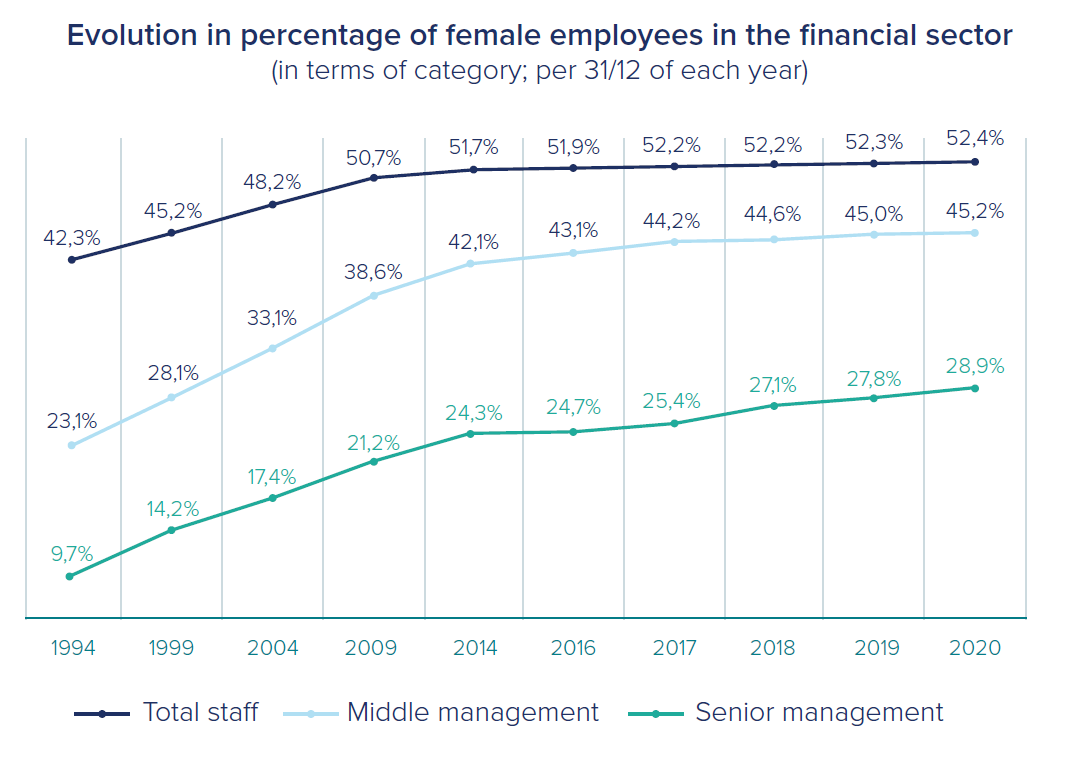 The impact of Women in Finance

90% of members say that gender equality is on the management agenda today. A majority of the members consider this theme as a priority. A small minority still struggles with drafting an action plan.

The graph below shows that the majority of Women in Finance members have been actively engaged in different areas for one or two years. Compared to 2019, today they are more committed to monitoring the progress of gender equality at all levels and to working on inclusive leadership for all leaders.

Impact of the corona crisis

For Women in Finance too, 2020 was a special year that was dominated by the challenges posed by the corona crisis. Most employees worked full time from home. In the local bank branches, a minimum number of employees was present.

The survey shows that the corona crisis had no effect on achieving more gender diversity and inclusion in the workplace. The theme remained high on management's agenda.

Challenges for the future

The survey shows that gender equality within the financial sector has improved in three areas:

In the near future, the sector faces three major challenges. First, it remains difficult for members to improve the gender balance in more digital/ IT positions. Second, the post-corona situation may have both positive and negative effects on women. On the one hand, there is more flexibility, but on the other hand, this can also lead to less visibility for women in the workplace. Finally, we must ensure that not more women leave the financial sector than before. Therefore, Women in Finance's ambition for 2022 is to accelerate the gender equality and empowerment of women in the financial sector.

Curious about the full report?

Download the full report below (only available in English).

Do you need more information?

Please do not hesitate to contact one of the following persons: